Hello, my effervescent little hush puppies, and welcome back to the Conan Exiles community newsletter. We hope you’ve had a great week so far!

It’s been an exciting week for the Funcom Oslo office. We launched Conan Exiles in on PS4 in Japan on August 23rd and so far, the game has been doing pretty well over there. We can officially say that we’re big in Japan. After Saturday’s PS4 patch[forums.funcom.com], which took care of some lag issues players were experiencing with debuff icons, Japanese players can play with Western players on the official PS4 servers.

The Xbox One version also saw a patch[forums.funcom.com] last week to update and fix the Clan Menu. As always, keep that feedback coming in.

Testlive and pets system
Over on the Testlive side of things we released a new patch last Friday[forums.funcom.com] to update the mechanics of the pets system. We lowered the amount of food required to systain a pet/thrall, increased the amount of time a companion could go without eating, increased what types of food a companion could eat (thralls eat gruel now, for example), and tweaked the food dispensers to push smaller amounts of food rather than a full stack at once. This will result in more equal food distribution.

The overall resources and time need to rear a pet was vastly toned down and pet pens will now be able to rear multiple pets at the same time. Food will decay very slowly when placed in pet Pens and the higher the tier of the pen, the slower it will decay. Food will also decay very slowly when placed in food dispensers. It was never our intention to make the pet system feel like an extra added grind and we hope these changes have helped bring that point forward.

Going forward in the Testlive branch we’ve started work on adding server options to enable/disable the feeding system for both thralls and pets. These will be separate settings, allowing you to set your own parameters. You’ll be able to adjust the system to a level of commitment/consequence that you want, including disabling it entirely.

We’re also working on adding a buff system when feeding thralls. If you match a thrall’s preferred diet they will gain a bonus buff. That way, if you do care about the specifics of each companion type, you can give them a temporary, short-term advantage, like buffing them before a fight. If you just want to prevent them from dying you can just feed them whatever they want. A server setting will allow you to make diet matching mandatory, if you want.

There’s more in the pipeline coming to the current Testlive build, but this is what we wanted to focus on right now. If you still haven’t checked out the Testlive branch you can find a detailed description on how to access it on our forums[forums.funcom.com].

We want to, once again, thank everyone for giving us their feedback (both positive and negative) on the pets system and we are happy that the changes we made were so well received. We still have some things to tweak and fix before Pets, Jhebbal Sag and the new combat animations go live, so expect more Testlive builds in the coming weeks.

Live and upcoming content
Those on the dev team not focused on Testlive are hard at work on the next dungeon and some additional content beyond that which we think you’re going to get a kick out of.

Our animators are revamping boss monsters to give them some hard hitting area of effect attacks, in case any parties of would be hunters and adventurers decide to try to gang up on them. Elephants will have a devastating stomp and sweep attack combo, while the boar will dash around to hit as many people as possible. We’re doing this to make creatures just a little more dangerous, even for large groups.

In terms of combat we’re working on adding the Power Shot to bows (as detailed here[www.conanexiles.com]) and our combat designers are looking at other things we can do with bows beyond this. Archery isn’t in the best place and we’d like for it to improve. We’ve added special arrows (Poison, explosives, healing and light) on the Testlive branch, so if you’d like to experiment with those you can find them there.

Community live stream
It’s stream week again this week and Natascha and Jens Erik are putting the community in focus. We want to see your best screenshots, videos, builds, fight, and all sorts of other cool things you’ve created in Conan Exiles. Share your creations with the Conan Exiles Twitter account for a chance to be featured. 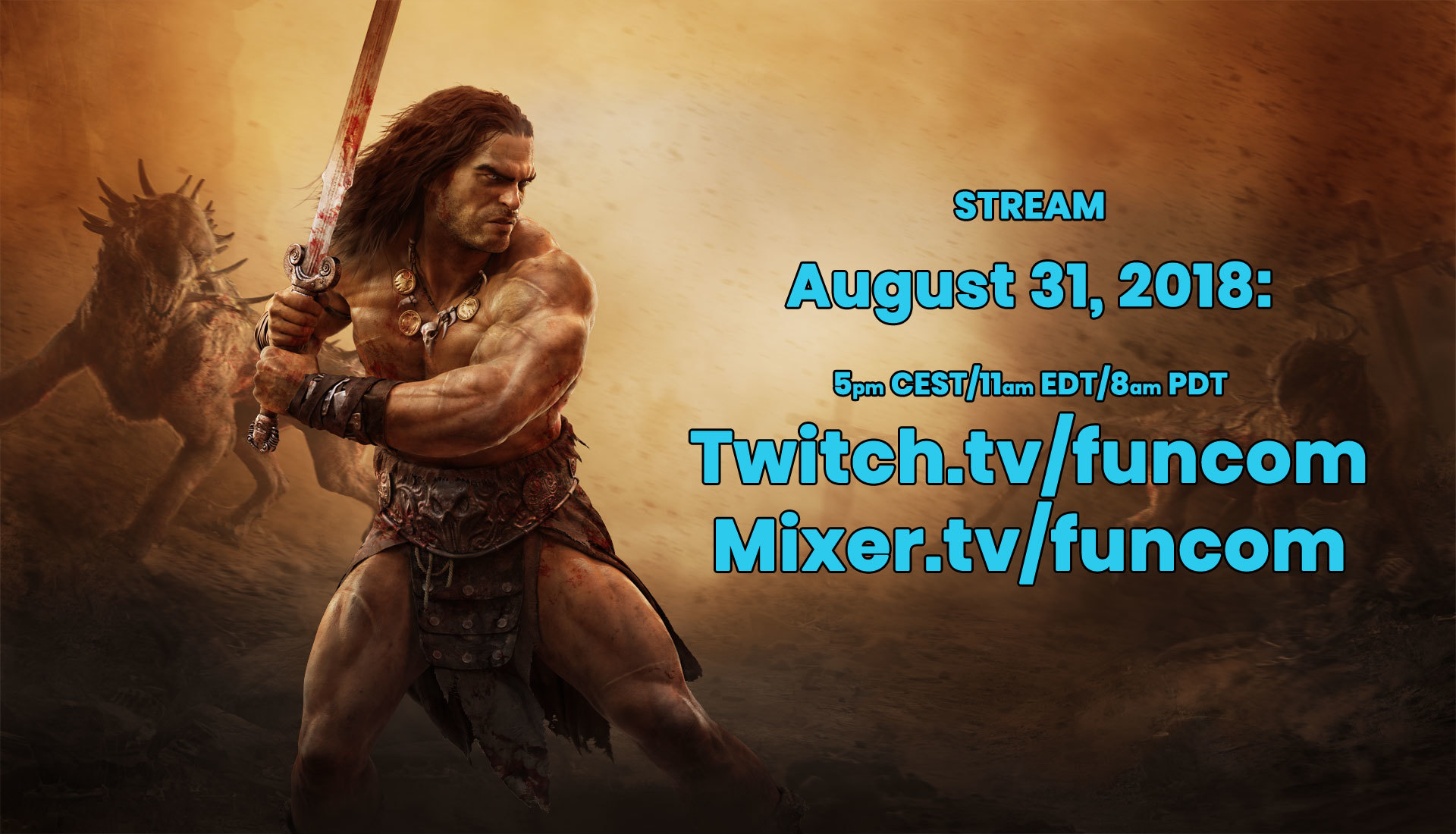 Join us on our Twitch[www.twitch.tv] and Mixer[mixer.com] channels at 5pm CEST / 11am EST / 8am PST for an hour of cool community content, some shenanigans, and maybe a giveaway or two?